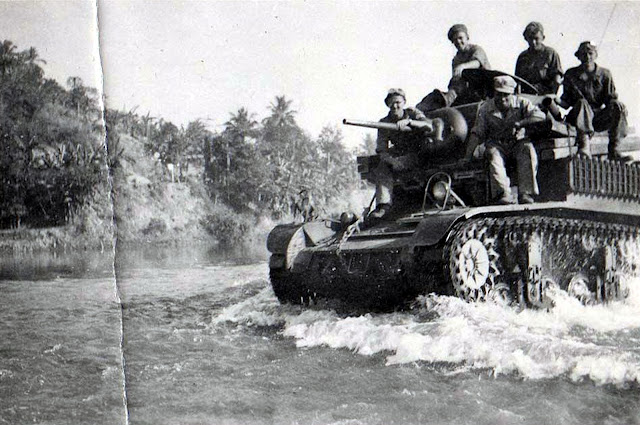 Dutch M3 Stuart tank of zesde-eskadron Vechtwagens Huzaren van Boreel crossing the river in Indonesia during the Revolutionary War. The M3 Stuart, formally Light Tank M3, is an American light tank of World War II. It was supplied to British and Commonwealth forces under lend-lease prior to the entry of the U.S. into the war. Thereafter, it was used by U.S. and Allied forces until the end of the war. The name General Stuart or Stuart given by the British comes from the American Civil War Confederate General J.E.B. Stuart and was used for both the M3 and the derivative M5 Light Tank. In British service, it also had the unofficial nickname of Honey after a tank driver remarked "She's a honey". To the United States Army, the tanks were officially known only as "Light Tank M3" and "Light Tank M5". The M3 Stuarts were the first American-crewed tanks in World War II to engage the enemy in tank versus tank combat. 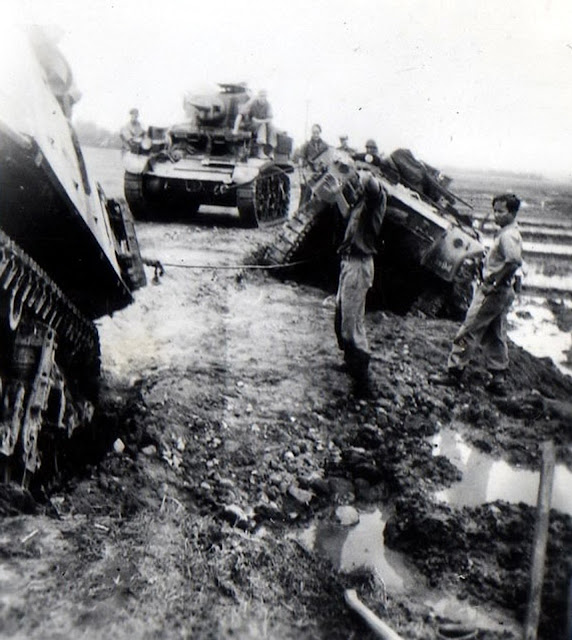 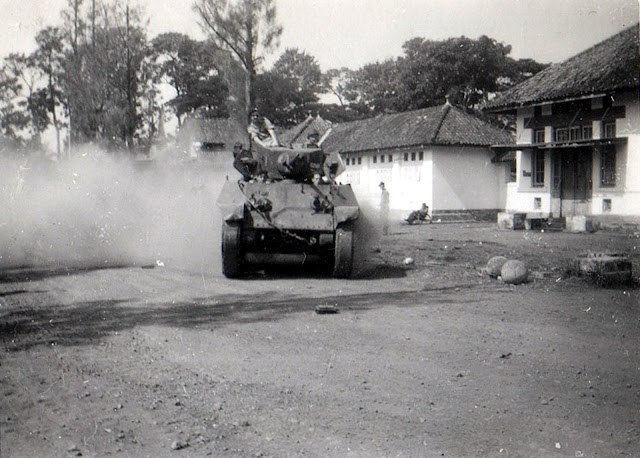 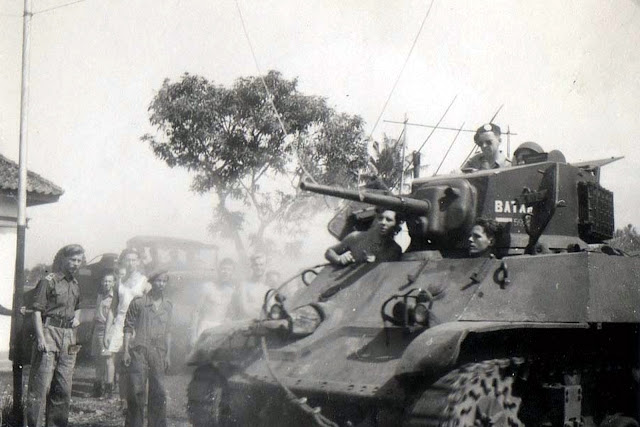 M3 Stuart Tank of zesde-eskadron Vechtwagens Huzaren van Boreel in Indonesia. After the 2nd Police Action and the end of combat operations, began a long period of waiting for the return to the Netherlands. The transfer of territory and thus jurisdiction to the TNI took some time. To pass the time they organized some kind of activities in their camp in Solo, including sports. There were also organized trips, for instance, to Borobudur.


Source :
https://sites.google.com/site/zesdeeskadron/6-e-tweede-politionele-actie-deel-2
Posted by Alif Rafik Khan at 10:45 AM 6 comments: 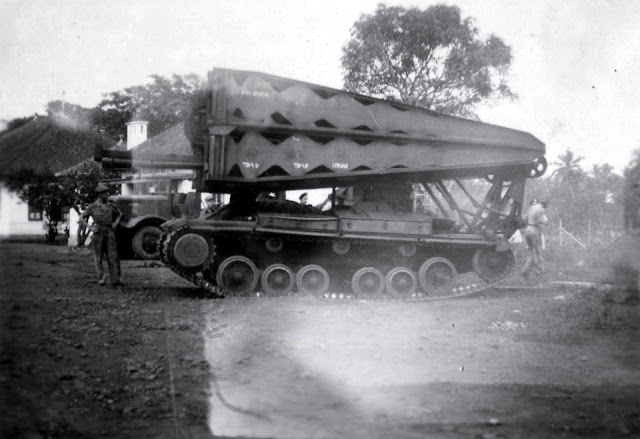 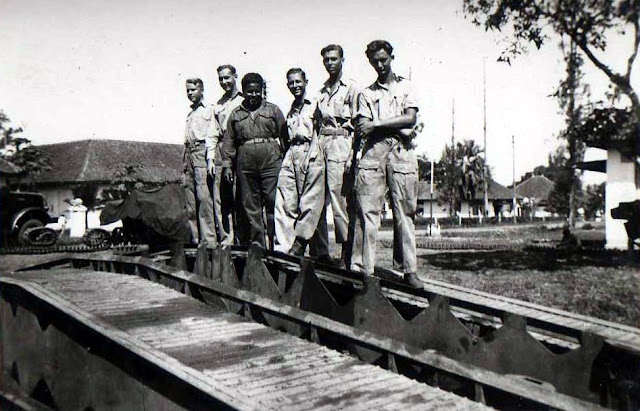 A British Valentine Bridgelayer (Bruggenleggertank) of the zesde-eskadron Vechtwagens Huzaren van Boreel in Indonesia. The Valentine Bridgelayer was the last version of the tank to see frontline service, and could deploy a medium sized bridge while under fire. A 'scissors' bridge was mounted on top of a Valentine tank. This was normally carried in the folded position, and was raised and put in place using a screw jack. The bridge could span 30 feet wide gaps and carry vehicles of up to 30 tons. A series of tanks were used as the basis for the scissors-bridge. Early development used light tanks. The project then moved onto the A10 cruiser tank, and from that to the dreadful Covenanter cruiser tank. Finally the Valentine was adopted, and entered production at the Southern Railway's Eastleigh Works. This involved removing the turret from Valentine tanks, and these were used on early AEC Mark I armoured cars. Six bridgelayers were issued to each armoured brigade equipped with cruiser or medium tanks. The bridgelayer was used in action in the Italian campaign, in North-Western Europe and in Burma. It was widely used with British and Commonwealth forces.


Source :
http://www.historyofwar.org/articles/weapons_valentine_bridgelayer.html
http://worldwartwozone.com/forums/index.php?/topic/27464-the-police-actionsindonesian-revolutionary-war-a-forgotten-conflict/
Posted by Alif Rafik Khan at 10:38 AM No comments: 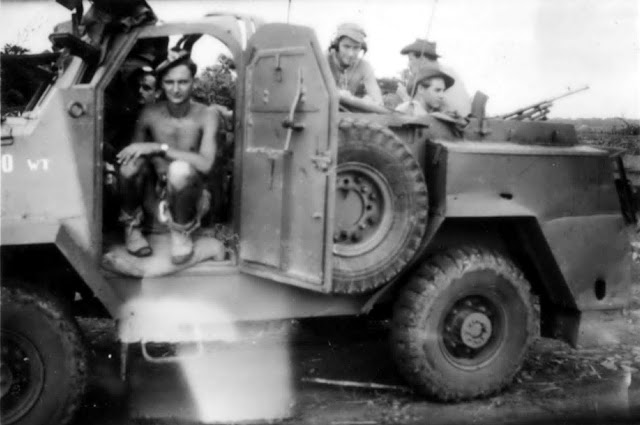 a Canadian origin GM C15TA armoured truck used by the Dutch forces in Surabaya during the War of Indonesian Independence.The C15TA Armoured Truck was an armoured load carrier produced by Canada during the Second World War. It was developed from the Otter Light Reconnaissance Car. The C15TA Armoured Truck was developed by General Motors Canada along a concept lines of the American M3 Scout Car. The vehicle used the chassis of the Chevrolet C15 Canadian Military Pattern truck design. Between 1943 and 1945 a total of 3,961 units were built in Oshawa, Ontario. Armoured hulls were supplied by the Hamilton Bridge Company.

A Chevrolet 1936 in Transport Museum, Malang 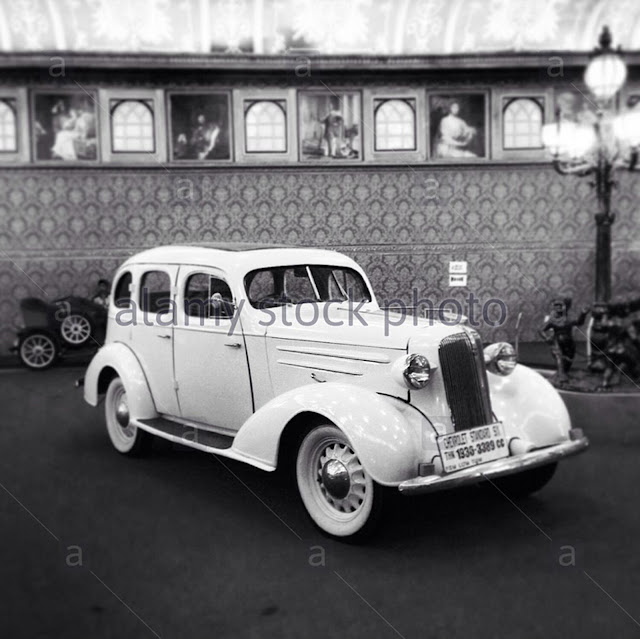 A nice Chevrolet 1936 at TransportMuseum (Musium Angkut) in Kota Batu, Malang (East Java). General Motors (GM) has been in operation before the Indonesian state is formed. Precisely when Indonesia was still under Dutch colonial grip. In 1927, the forerunner to the GM, who was named NV General Motors Java Handel Maatschappij (NVGMJHM), established in Indonesia. Two years later, General Motors for the first time introduced their six-cylinder-engine-car. Because of the high demand, GM consequently decided to build a plant in Tanjung Priok in 1938. The Chevrolet factory later became the first car manufacturer in Indonesia. But General Motors was forced to stop producing after Japan's entry into Indonesia in 1942. 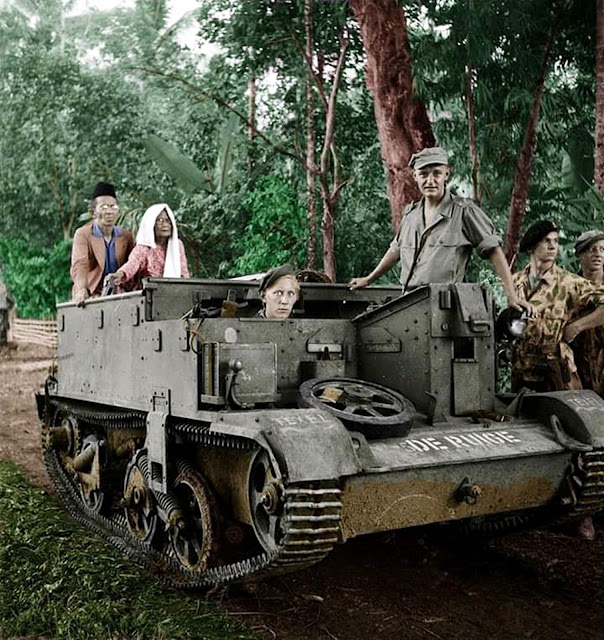 The tracked vehicle is a British Universal (Bren Gun) Carrier. The original role envisaged for the Universal Carrier was for a fast, lightly armed vehicle to carry infantry across ground denied by small-arms fire and specifically, the Bren light machine gun and its team, hence the name Bren Gun Carrier. (NB: A broad parallel can be drawn between that concept and the tactics of the APC (M1 L3A1) Troop which carried an Infantry Company. Each infantry section, comprising ten men [one section to a vehicle] possessed a light machine gun crew of three men and a BREN GUN. 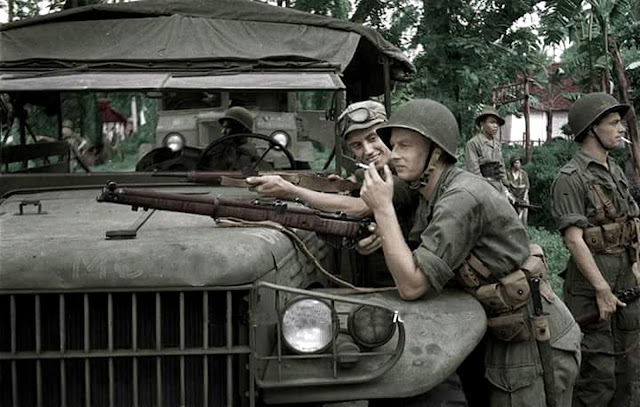 This colorized photo showing a military style truck which is a Dodge WC of World War II vintage and this one looks to be a WC52 weapons carrier. 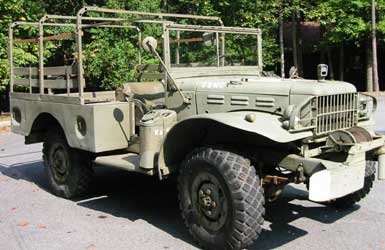 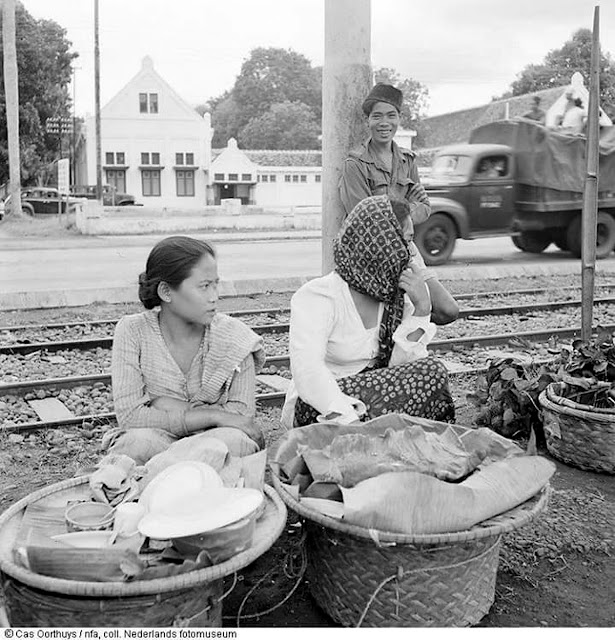 Two women sit while selling goods on the Koningsplein (King's Square) in old Batavia (now Jakarta). The civilian style truck passing in the background is a 1946-1948 Ford (you can identify it by the distinctive louvers in the side of the motor hood). Behind you can also see the St. Aloysius Broederschool. The picture was taken by Cas Oorthuys between 1 January 1947 to 28 February 1947. 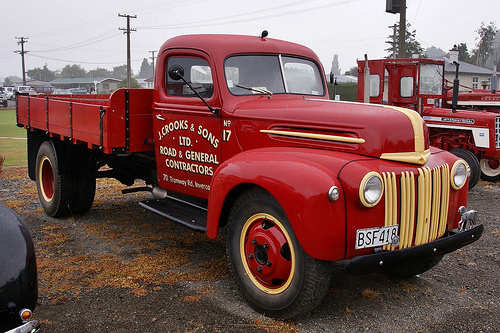 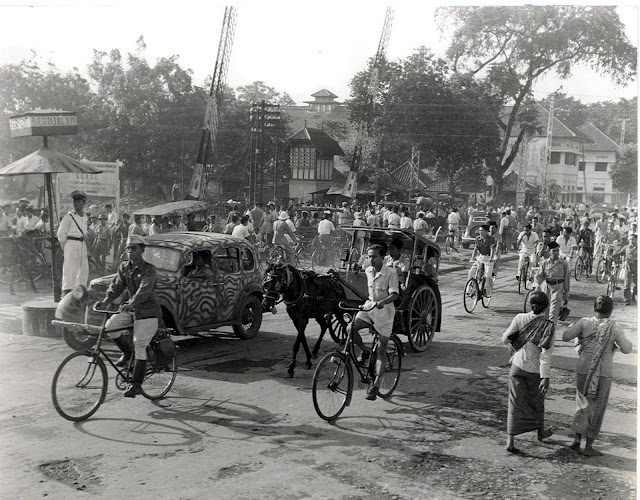 The busy traffic scene on Jalan Malioboro (Yogyakarta) in front of the doorstop of Tugu train station, 19 February 1948. Regarding this photo, I am (Bill) not very knowledgeable on British cars, particularly the smaller "family car" type so I am not positive about this vehicle with camo paint. The closest I have come is possibly an Austin Seven from the late 1930s. Below is a photo of such a car from the rear so you can see the shape of the third side window which is slightly different from other British Sevens.  Let me know what you think! 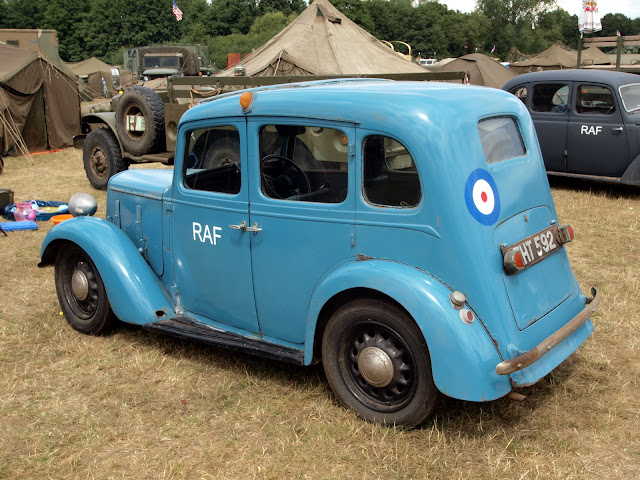 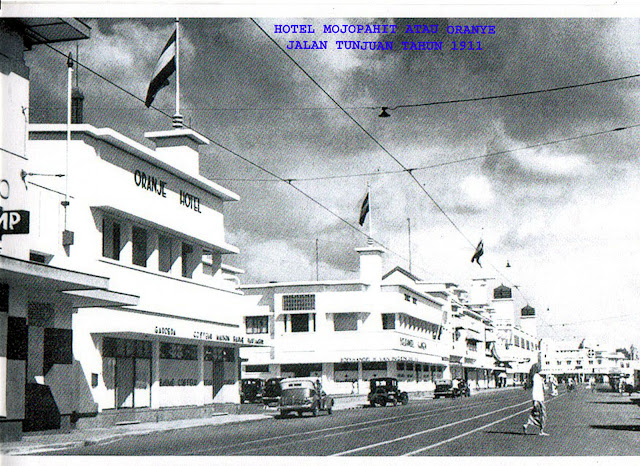 Oranje Hotel (now Hotel Majapahit) in Tunjungan Street, Surabaya. The only car I (Bill) can make a good guess at is the first one which looks to me like a 1934 Chevrolet Touring Car.

Assortment of Cars in front of Internatio Building 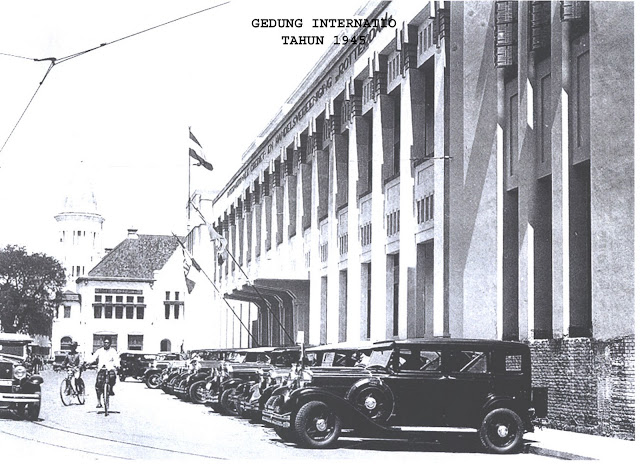 Internatio (Internationale Handels-en Credietvereniging Rotterdam) building in Surabaya in 1931 (the caption in the picture is wrong). The picture show Assortment of mostly sedans and, possibly a mix of Buick and Chrysler vehicles. Looks like a hire cars for tourists or businessmen visiting Indonesia / Netherlands East Indies in the early 1930s.  "High Class Taxis" you might call them! 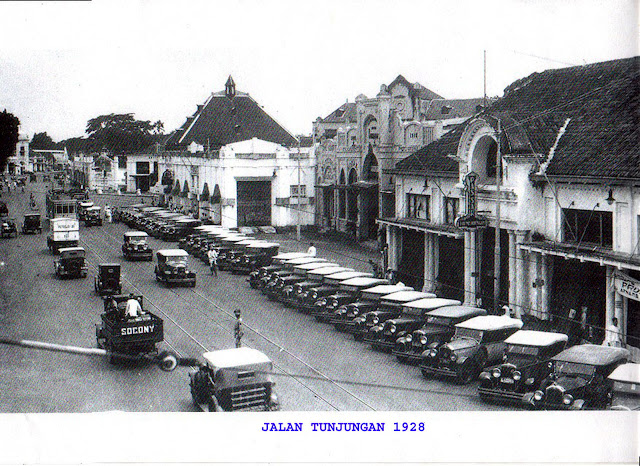 Jalan Tunjungan (Tunjungan Road) in Surabaya. This picture shows more than 30 cars that would have been very expensive in the day, and they may be a mix of Buick and Chrysler vehicles, all 4 door convertibles. This could be some sort of a car community.

Jalan Tunjungan in the 1950s 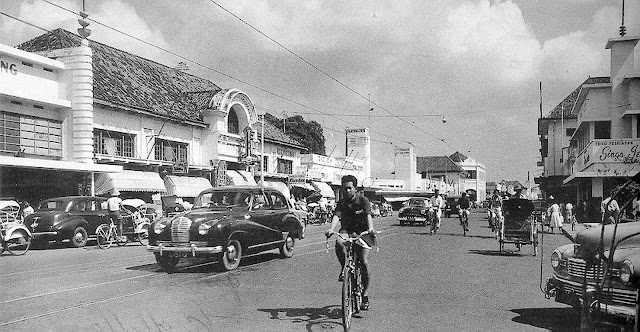 Jalan Tunjungan (Tunjungan Road) in Surabaya, circa 1950s. The picture is facing to the north side in front of the Orang Majapahit Hotel, next to the market (Pasar). For the identification of the vehicle, from left to right: a 1939 Buick, an Austin A40 Somerset (everything fits except the lower grille but this may be an aftermarket accessory). Next an Opel Olympia Rekord of ca 1953 in the background. Finally on the right, a 1948 Nash (Super 6 or Ambassador).

Ford Model A in Surabaya 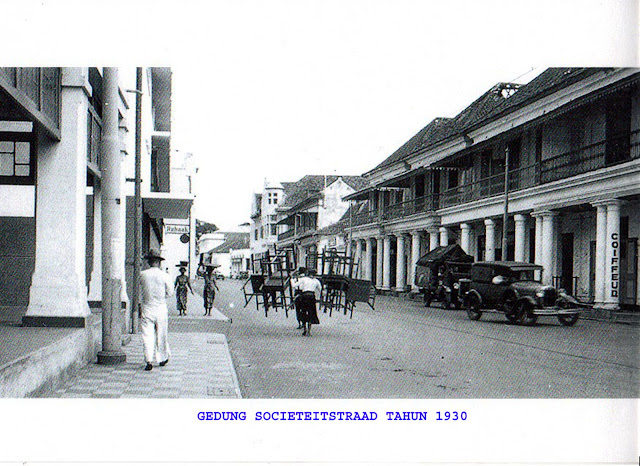 Societeitsraad building in Surabaya in 1930. The vehicle at left is a Ford Model A panel van. The Ford Model A (also colloquially called the A-Model Ford or the A, and A-bone among rodders and customizers), was the second huge success for the Ford Motor Company, after its predecessor, the Model T. First produced on October 20, 1927, but not sold until December 2, it replaced the venerable Model T, which had been produced for 18 years. This new Model A (a previous model had used the name in 1903–04) was designated a 1928 model and was available in four standard colors. By 4 February 1929, one million Model As had been sold, and by 24 July, two million. The range of body styles ran from the Tudor at US$500 (in grey, green, or black) to the Town Car with a dual cowl at US$1200. In March 1930, Model A sales hit three million, and there were nine body styles available. Model A production ended in March, 1932, after 4,858,644 had been made in all body styles. Its successor was the Model B, which featured an updated 4-cylinder engine, as well as the Model 18, which introduced Ford's new flathead (sidevalve) V8 engine. 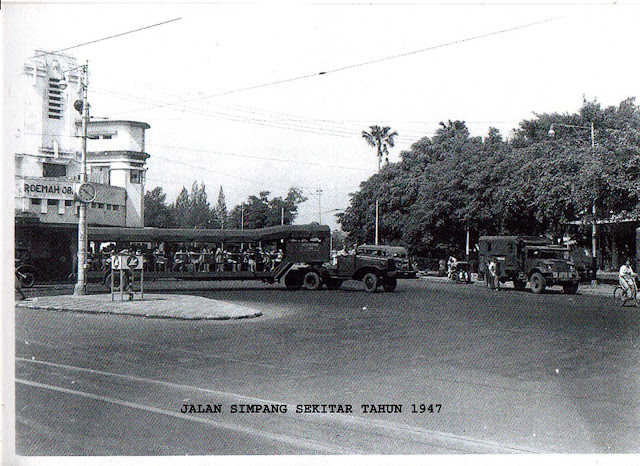 Jalan Simpang (Intersection Road), Surabaya (East Java), circa 1947. The truck with long passenger lorry is a International Harvester M5H6, while the military truck at right is a CMP, probably a Chevrolet 30 CWT.

Dutch Soldiers in a Jeep in Front of Kemayoran Mosque 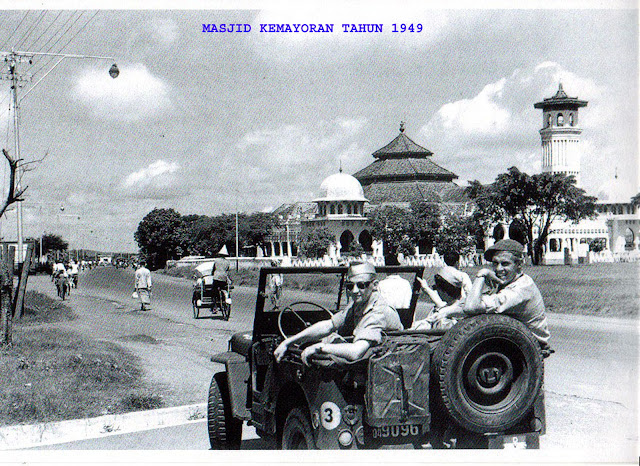 Kemayoran Mosque (Masjid Kemayoran) in Surabaya, 1949. Some Dutch 'tourists' boarded Willys MB type 1944 jeep and posed in the artificial crossing in front of the mosque. 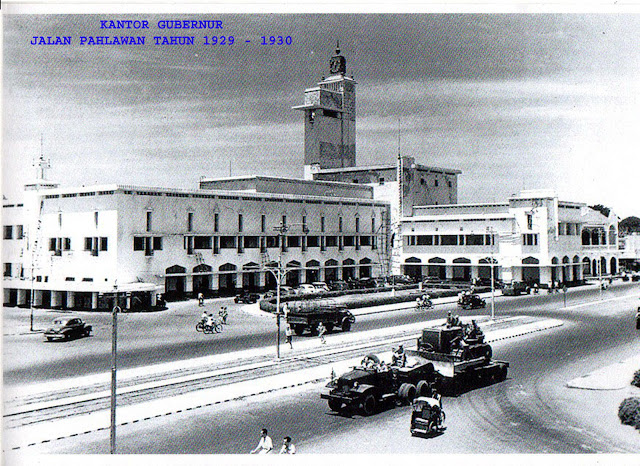 Surabaya in 1929-1930. The building is Gouverneurs Kantoor Oost-Java, designed by architect W. Lemei while the constructor was Ballast Ned. AAnn. Mij (NEDAM). Now becoming the office for the East Java governor. The truck in the foreground is International Harvester M5H6 2½ ton. They were originally supplied to the US Marine Corps and the US Navy. I (Bill) cannot yet identify the car on the left nor can I identify the crawler tractor on the trailer.


Source :
http://surabayainfowisata.blogspot.co.id/2015/08/kantor-gubernur-jatim-tempoe-doeloe.html
Posted by Alif Rafik Khan at 11:50 AM No comments: 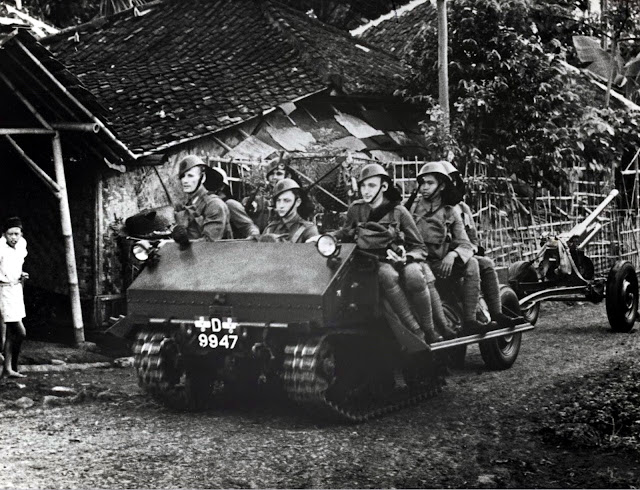 KNIL forces with light armored vehicle entered an unidentified 'kampung' (village) in Bandung, West Java, in 1942 (possibly in the wake of Japanese invasion). The vehicle is a Vickers Utility Tractor supplied from Belgium to the KNIL, towing a 47 mm M/1935 Böhler anti-tank gun made in Austria. The Registration number D 9947 is for Preanger district/Bandung. The tractor probably serving in APLA 2 (2nd Heavy Weapons Coy) garrisoned in Cimahi, West Java.

Some 50 Vickers Utility Tractors were ordered from Familleureux factory in Belgium by the Netherlands East Indies Army (KNIL) in October 1939. This was followed by a second order for 30 more vehicles in December 1939. The first 20 reached Java in April 1940, while another 30 were scheduled for delivery in May 1940 but overrun by the German invasion of Belgium. So it seems as only 20 were received by the KNIL. They were used as tractors for 47 mm M/1935 Böhler anti-tank guns made in Austria. The Vickers Utility Tractor had at least three versions in service: two infantry (with different track bases) and one cavalry version. 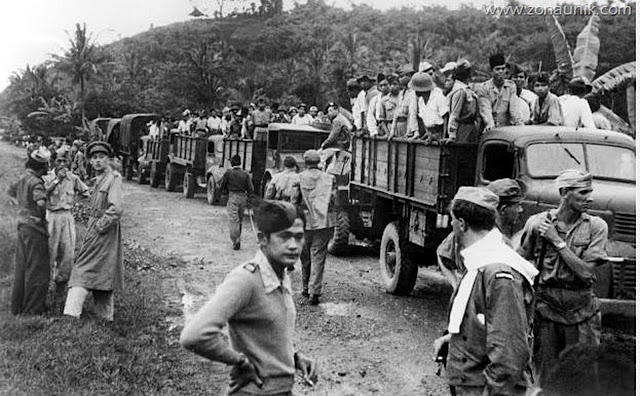 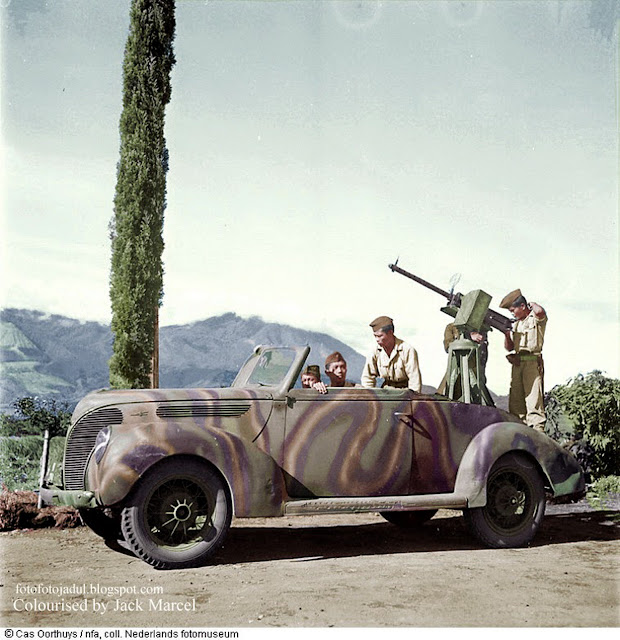 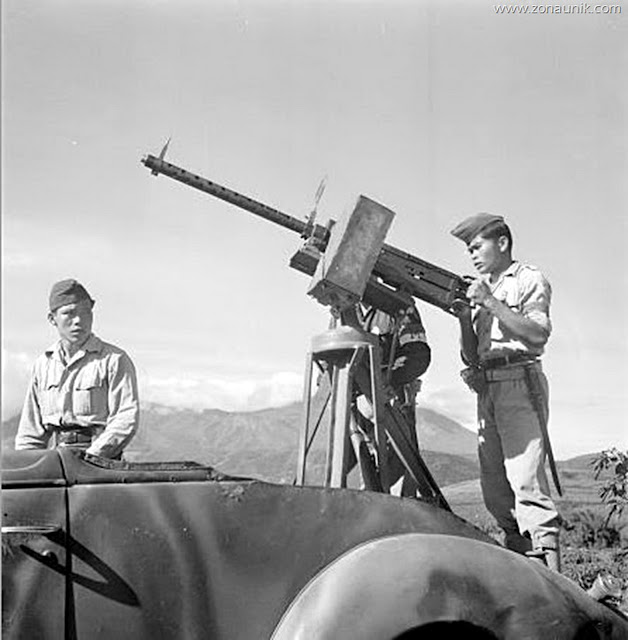 Two soldiers of the Republican army (Indonesia) manning a mobile anti-aircraft gun mounted on a 1938 Ford Model 81A 760B De Luxe Club Convertible with non standard wheels and tyres (I can imagine the wire wheels were fitted for more ground clearance). Indonesia, 1947

Dutch Machine Gunners in the Battle of Palembang 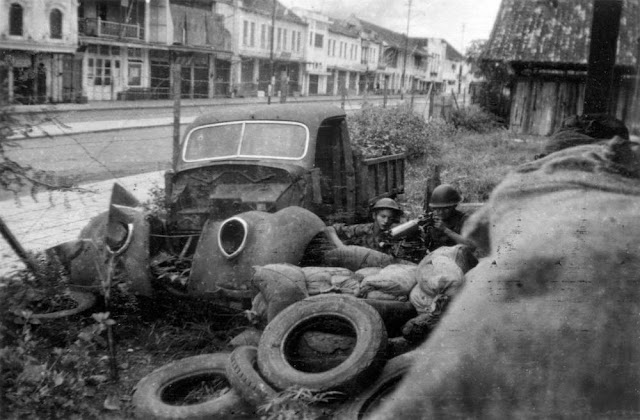 This one is a workshop conversion of either a 1938 or 1939 Ford from a sedan to a pickup truck. As the grille and entire engine hood are missing, I (Bill) cannot tell for sure which year it is and can only go by the headlamps which were identical on both years. The picture was taken by W.F.J. Pielage (a Dutch soldier) in Palembang, January 1946.


Source :
http://indonesia-zaman-doeloe.blogspot.co.id/2015/09/palembang-di-saat-perang-kemerdekaan.html
Posted by Alif Rafik Khan at 1:18 AM No comments: 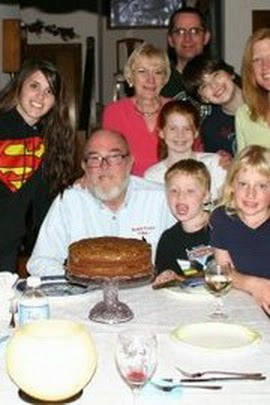 Bill Murray has done research on the history of wheeled/non armoured military vehicles from around the world 1930-1945 for 60 years. In the last few years he has concentrated on the history of US marque vehicles sold to, manufactured or assembled in countries outside the US 1930-1945. Bill worked for Volvo and SAAB for 22 years and owned his own HobbyTown USA franchise for 20 years. He also lived and worked in Sweden, Peru and Canada and was born in China. You can email him at: mostoysinc@aol.com 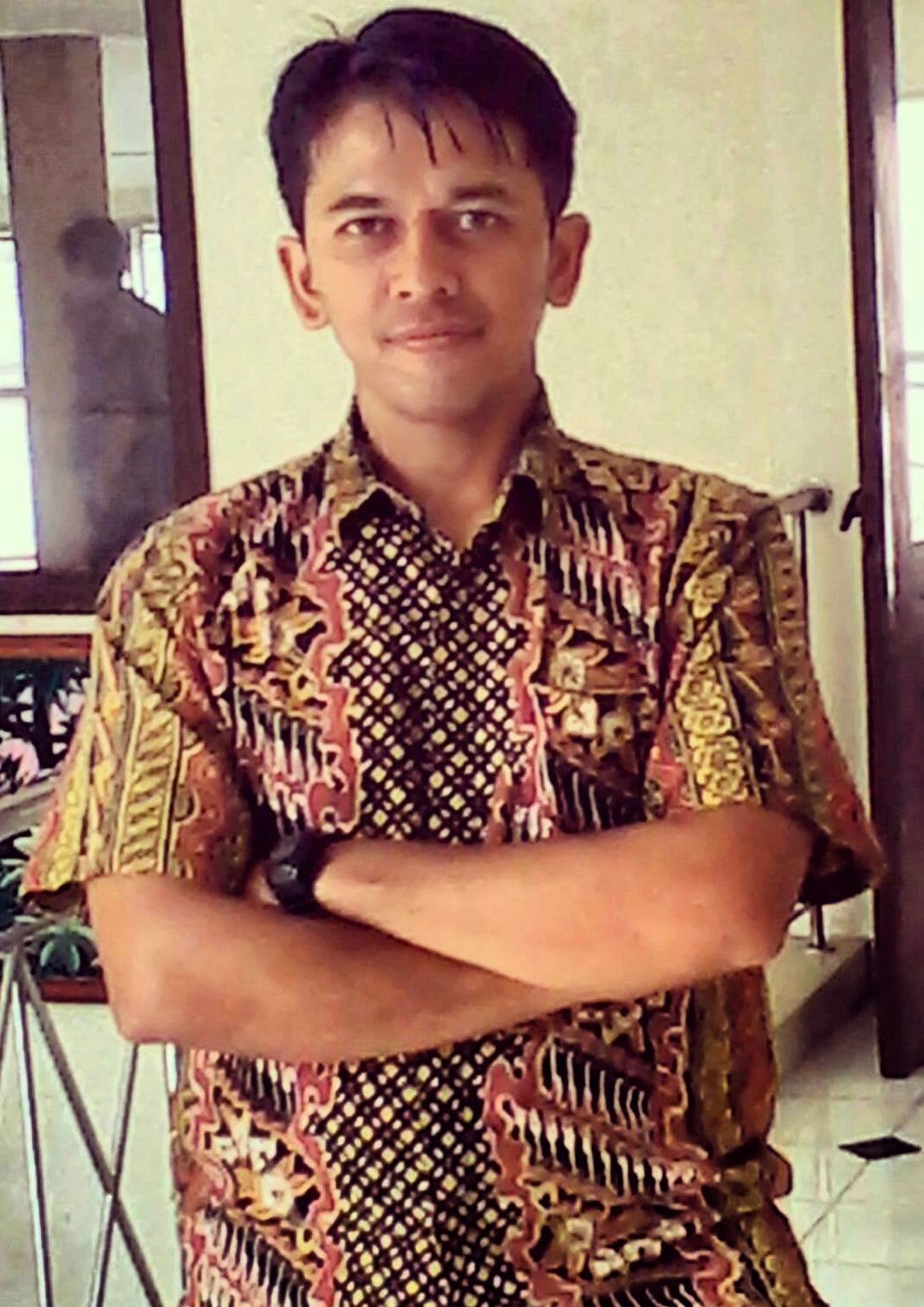 Alif Rafik Khan is an amateur historian who loves history, especially about World War II and Wehrmacht military. At this time he manage some blogs, and all dealing with history or World War II. He's also active in various forums and Facebook groups. Right now he is resided in Indonesia even though his grandfather immigrated from Pakistan. You can email him at: alifrafikkhan@gmail.com